To achieve greater flexibility at the stage of visualization, we had to use additional passes: Point Position Pass, Normals Pass (to highlight the top or bottom side of the character), ID Pass, etc.

We rendered everything on our farm. It took approximately a night to render one shot. Before the final approval each shot was rendered 2 or 3 times.

The animated film was rendered with V-Ray. Everything was rendered separately: water, foam, pirate’s beard, objects and characters. We spent a lot of time on the visualization of water (refractions, reflections, the turquoise color), trying to achieve the same effect in 3D. When we did it, we realized that it would take ages to render those shots. Besides, it gave us very little fine tune control over each aspect of the image. So, the final look of water was achieved in compositing.

As for the textures, we increased their resolution 4 times which reflected on the volume of visualization work. In order to cope with it, we created a simple pipeline and used the following hypershade node tree, which allowed us to render quickly and effectively. 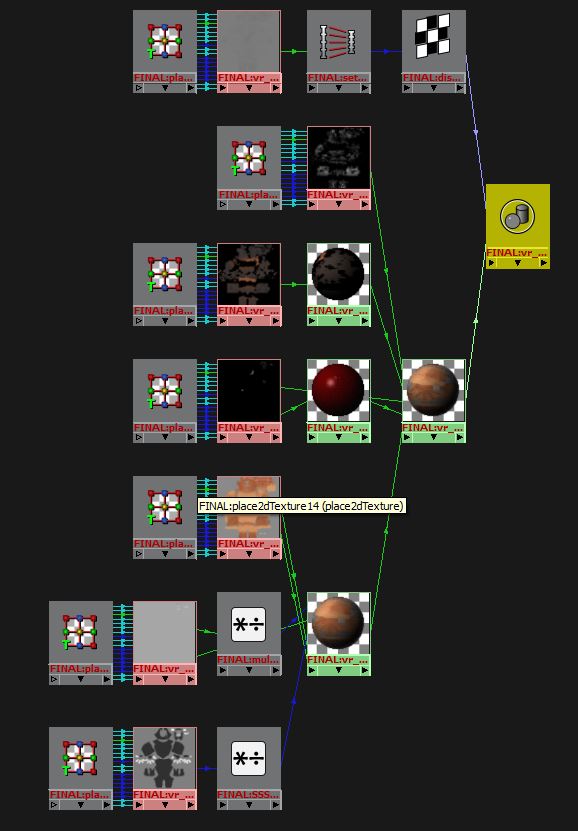 Of course, the most challenging shots for us were the ones that involved interaction of characters with water (the fish jumping out of the water, Dji rushing over the water surface).

But since we came across some rather difficult things that only big studios can do and we were limited in our resources, we had to optimize the process and break it down into several parts. Each splash was simulated and rendered separately. To have more fine tune control in compositing, we rendered about 7 additional passes for water grading. So, if we had 6 splashes in one scene and each of them consisted of 7 passes, then we could use about 40 passes for water grading in one shot, which gave us greater flexibility.

How did it all begin? One day the director said: “Let’s simulate water!” So said, so done. After some thinking, we did some tests of water in Maya:

After seeing the tests, the director clutched his head in terror and softly explained to us that we misunderstood the task. It turned out that we had to simulate not just water, but a whole ocean with all the details: splashes, spray, foam, etc.. After such comments, we had to throw out all previous tests and start everything from scratch.

In our animated film water is the fourth character. Every splash (there may be several splashes in one shot) must look natural and correspond to the artistic vision of the director. In some shots we used several types of splashes.

Water simulation became a great challenge for our studio as we’ve never done it before and the water itself is an interesting object, which also requires a lot of computing power. We had to figure out how to cope with the task, but not to the detriment of artistic conception. Thus, every shot was broken down into smaller tasks: splashes and the surrounding ocean. The splash in its turn was broken down into: basic simulation, foam and additional small splashes. In other words, one shot could include up to 10 separately rendered simulations.

These are the main elements of water simulation:

The final look of water was achieved in compositing. As a result of some simple manipulations, the water gets its specific color and refraction that create a sense of depth.

This is how 3D animated films are made. As you see, it’s a long and winding road. We enjoyed every step of the process and we hope that you’ll enjoy watching our film 🙂
Stay tuned!