This was how the morning of a beautiful Sunday, awaited eagerly by those who wanted to conquer 50km distance of asphalt road by bike, began. That day the long-awaited fall bicycle event, Chisinau Criterium 2015, took place. 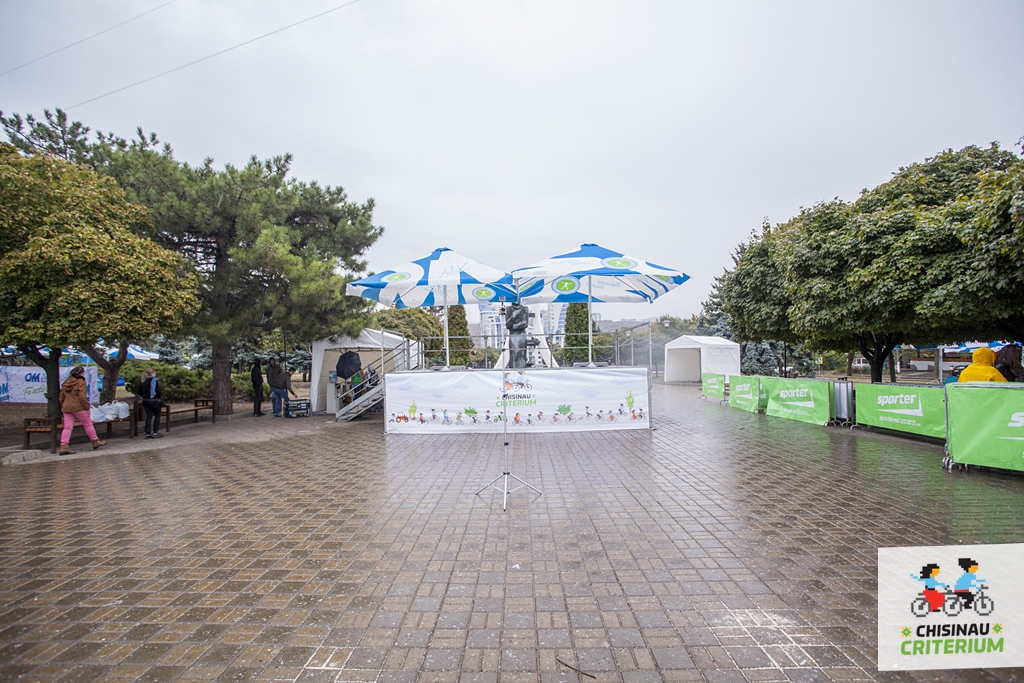 It became a highly anticipated event thanks to Sporter Governmental Organization, who during this year has organized and held two major events in the history of sport of our beautiful country: in April the International Chisinau Marathon and in July – Ghidighici Sea Mile swimming competition event in open water. After such events people were waiting for something new and this was because those who reached the finish line were awarded special medals. 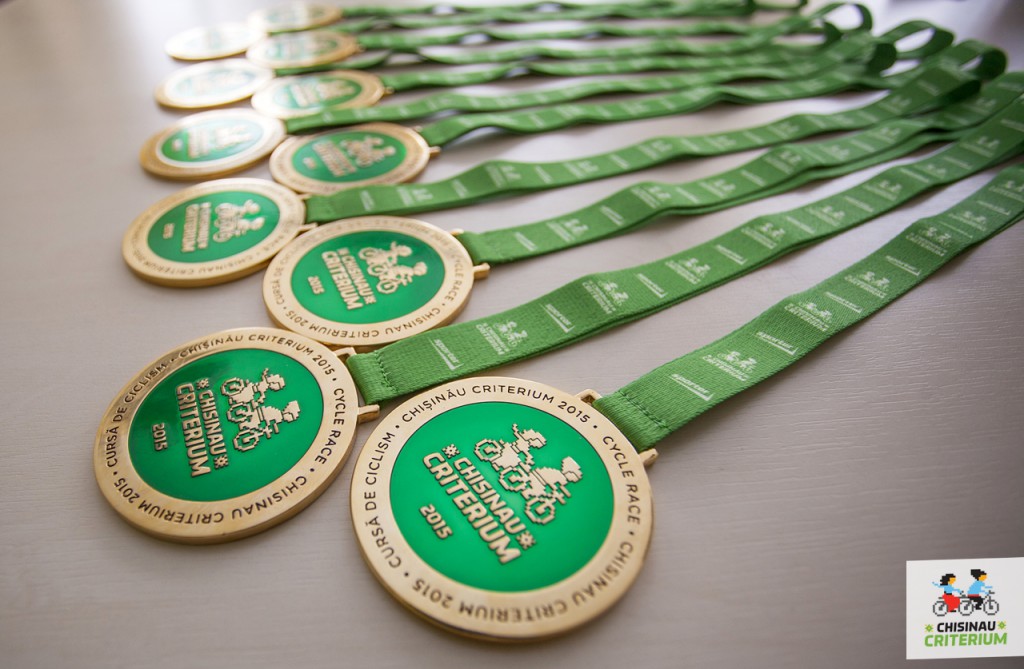 On 11 October, Chisinau Criterium became a whole new sport and rainy event for many of its participants. The race was held according to a totally different scenario, and this scenario was orchestrated by the WEATHER! 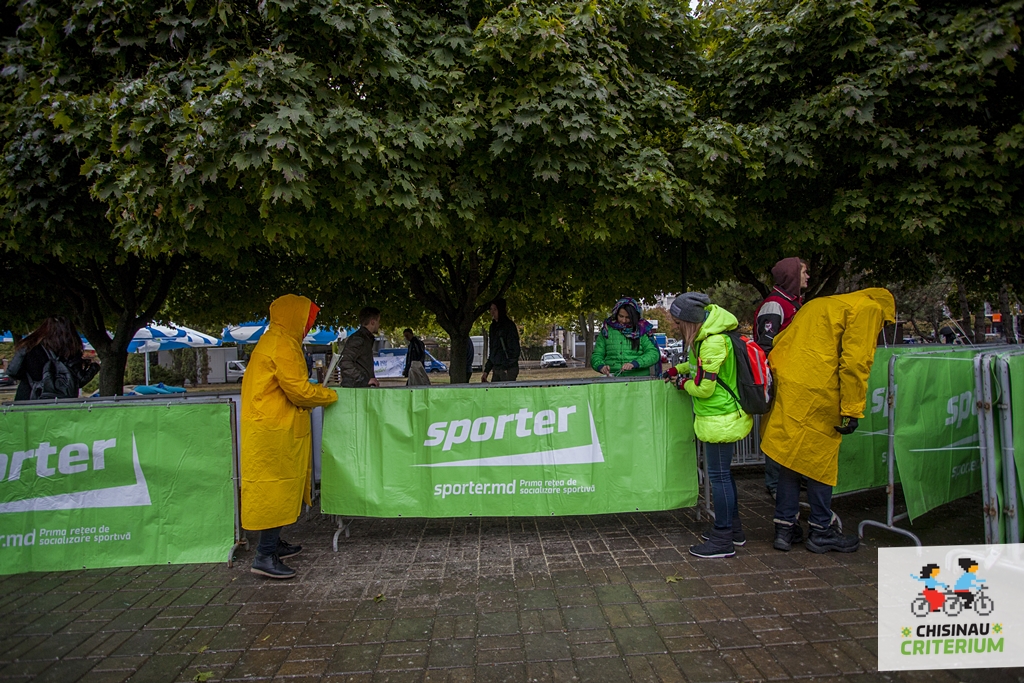 The bikes are ready. Giant, Masterteh and Bikeshop technical support centers set up and pumped the wheels. The participants are lent Velopoint bikes, who gladly accepted to rent their metal horses to the Velo Fun participants. Those who wanted to check wheel pressure could do it in the German CDR tent. 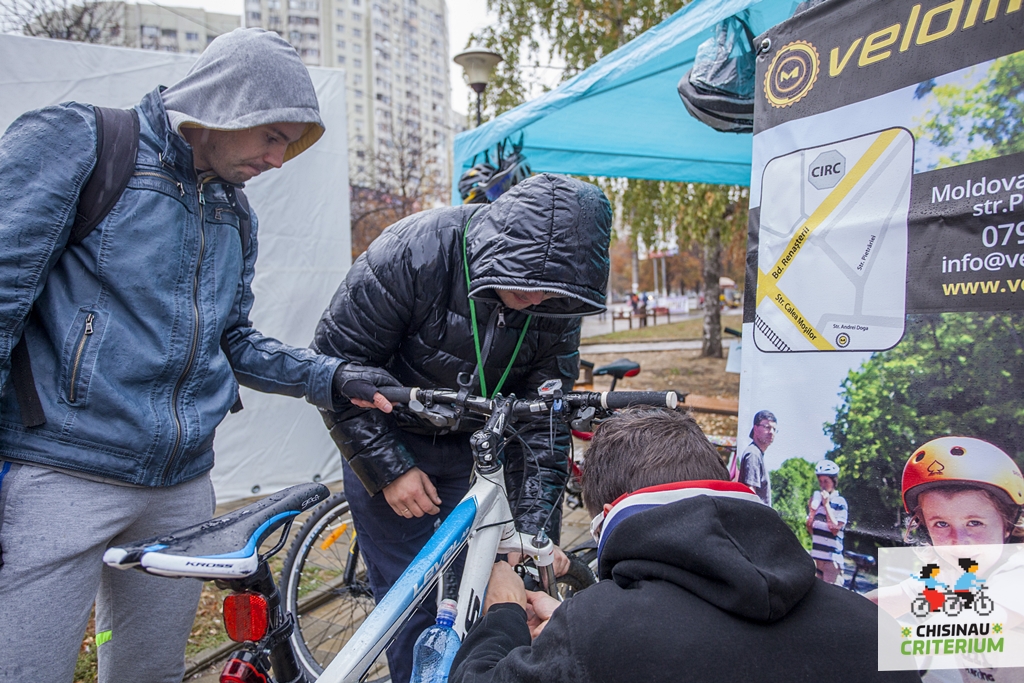 The participants drink OM water, warm up with Fitness Doza trainers and occupy their positions at the start line! 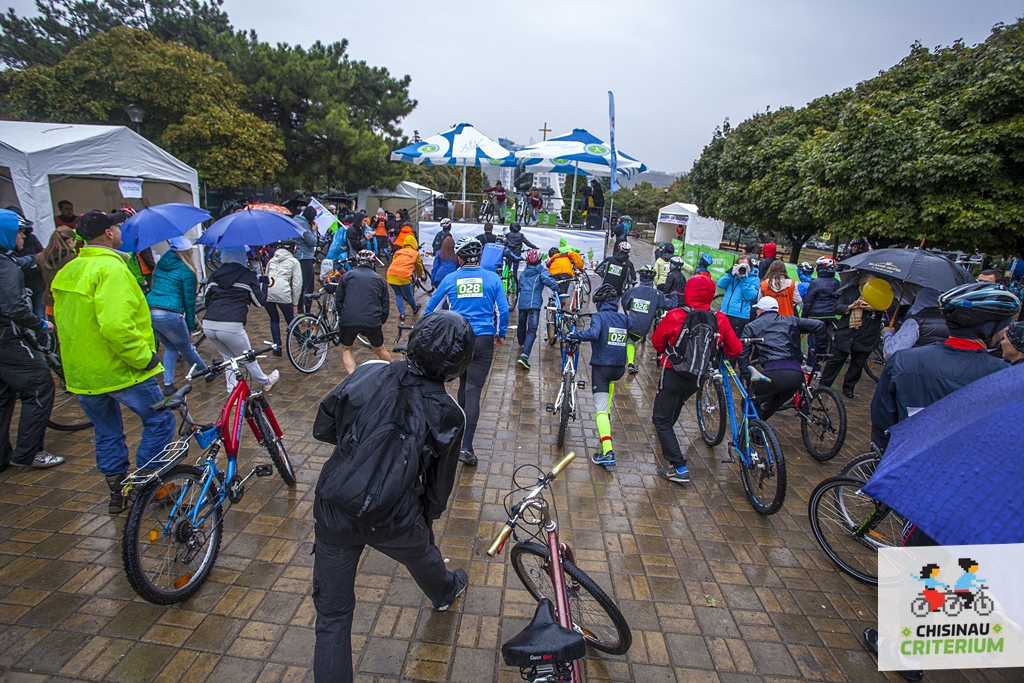 At 12:00p.m. the Velo Fun event starts for all participants; their number exceeds 100 people, regardless of bad weather. In front of the racers a JEEP TRIAL CROSS MOLDOVA car is driving, where Play.md crew is set up. Thanks to them we will have the chance to see a full video and photo report about the event. 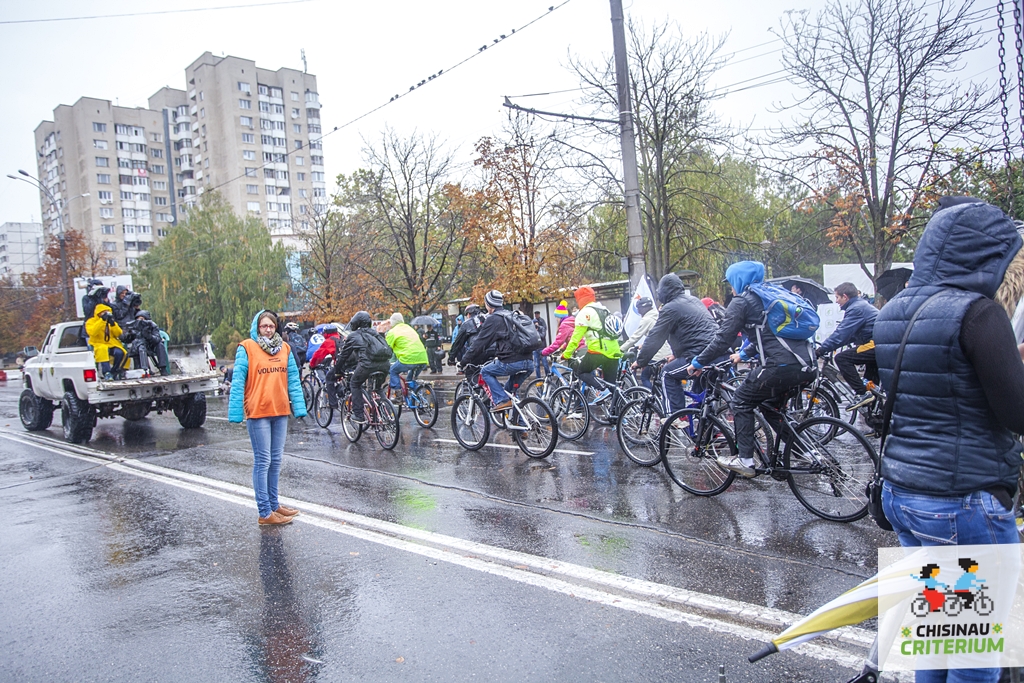 Later, the start for all Criterium sportsmen is given, who have to cover a 50km distance, running along the Moscow Boulevard, despite difficulties, cold wind and rain. 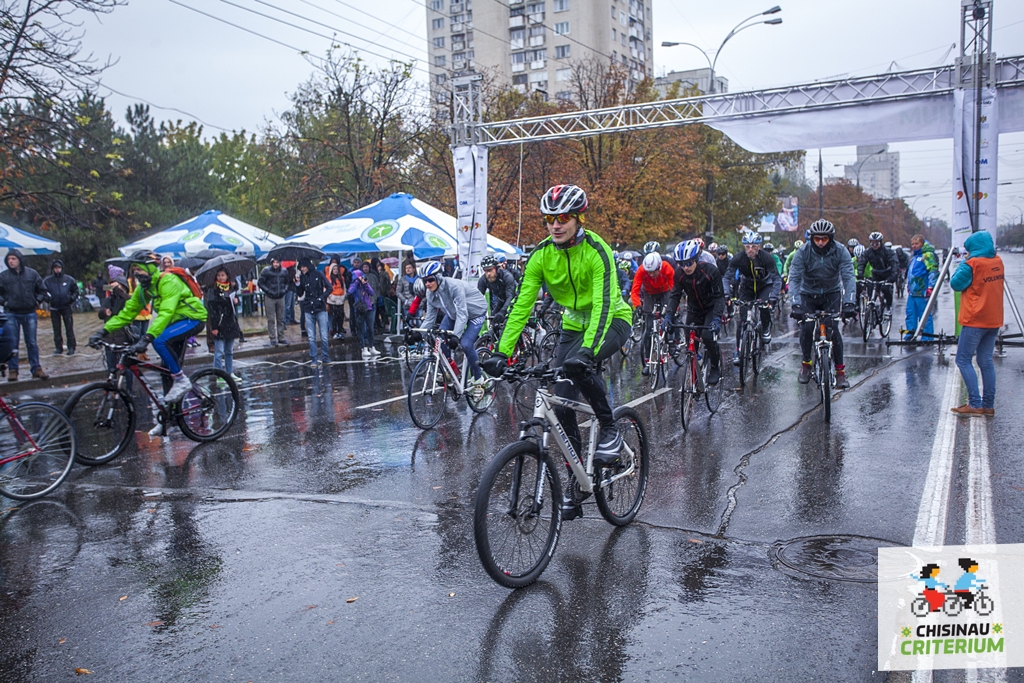 So the cheering team is at its place, the volunteers and patrol force guard the order in all Riscani area. The pro athletes conquer one roundabout after the other to get to the target, the leaders of the race, or rather the Lords of Roundabouts, are ahead of all, as always. For the duration of the entire race one patrol car and another JEEP TRIAL CROSS car with an electronic screen, showing the exact race time, is driving in front of the participants. 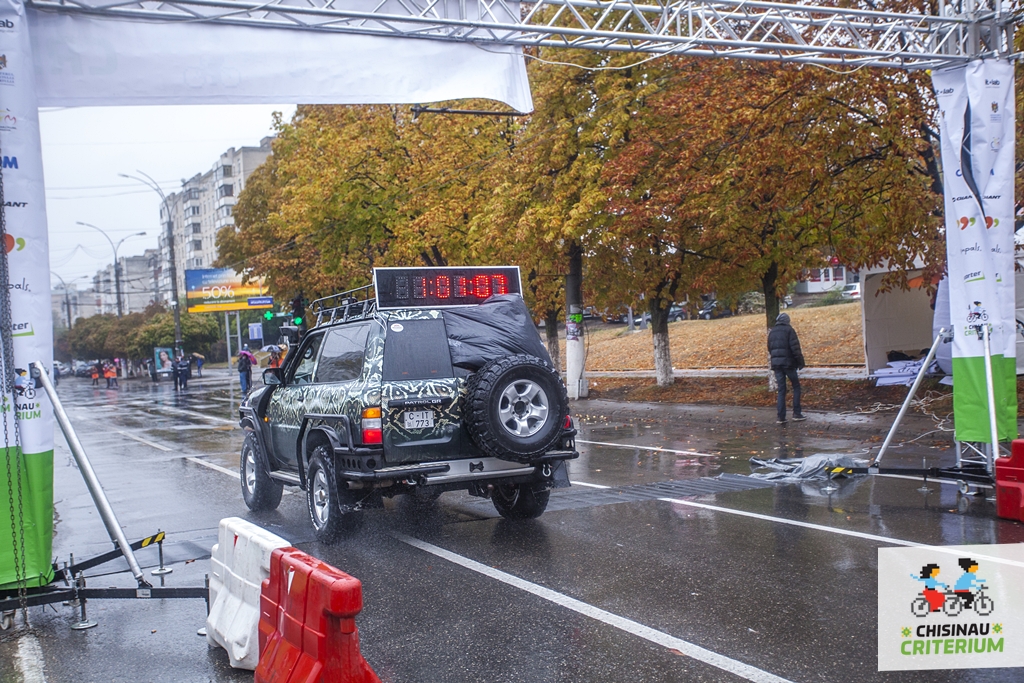 One hour later and the Velo Fun participants finish the race – satisfied, happy and enjoying their race, regardless of bad weather that can’t get in their way (BAD WEATHER is not an obstacle!). 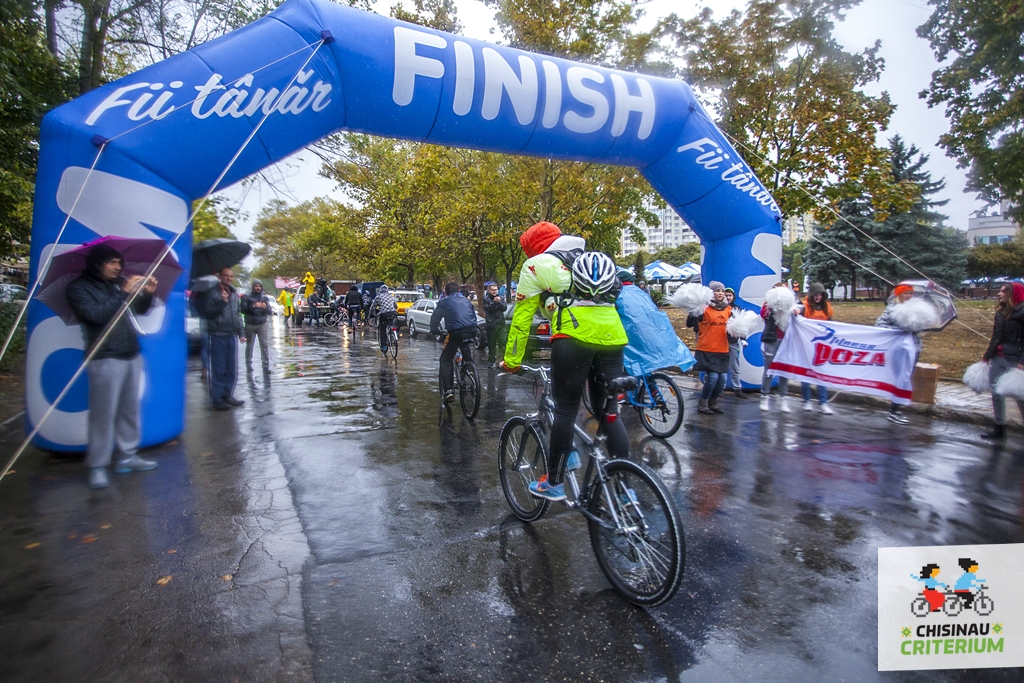 While the Velo Fun participants were getting their much deserved rest, the other bicyclists were competing among them, covering 30km distance already. At the same time, a lottery organized by OM and Masterteh was held on the stage. The lucky person won a bicycle – the final result of a painstaking work of Andrei Cimilea, the Masterteh founder. 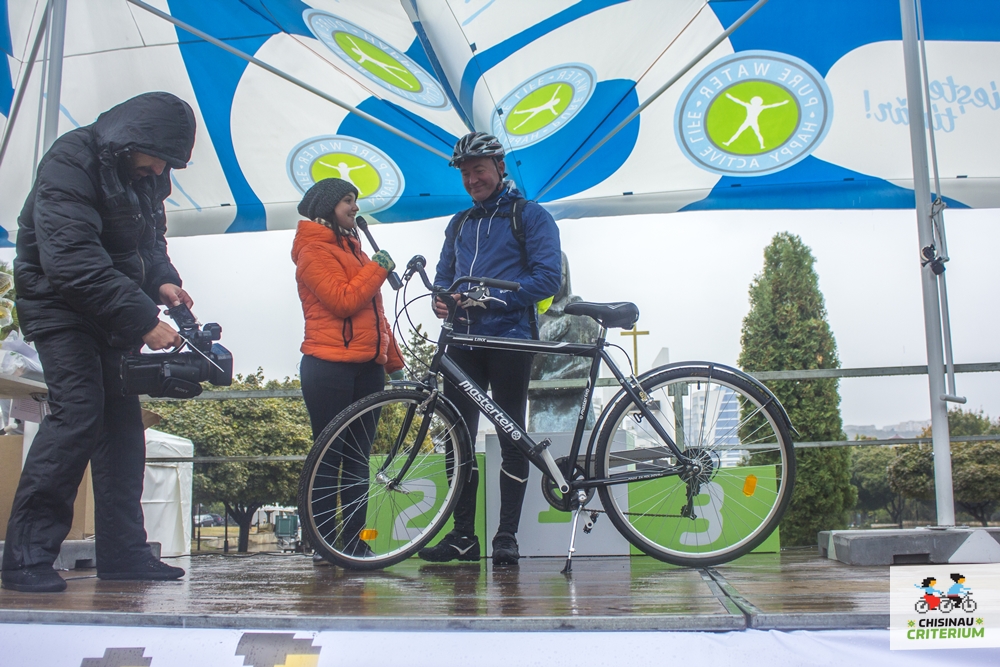 So! The finishing time for Criterium race, to which citizens of Chisinau city gather in the Afghanistan War Victims Park, comes. About 100 pro athletes are covering the last kilometers of the race. The winners, as usual, finished the race some half an hour earlier, being awarded their deserved medals. Almost all heroes managed to conquer the streets of Chisinau city in 2 hours, the time being one of the race’s conditions, and, thus were awarded the golden-greenish medal Chisinau Criterium 2015! 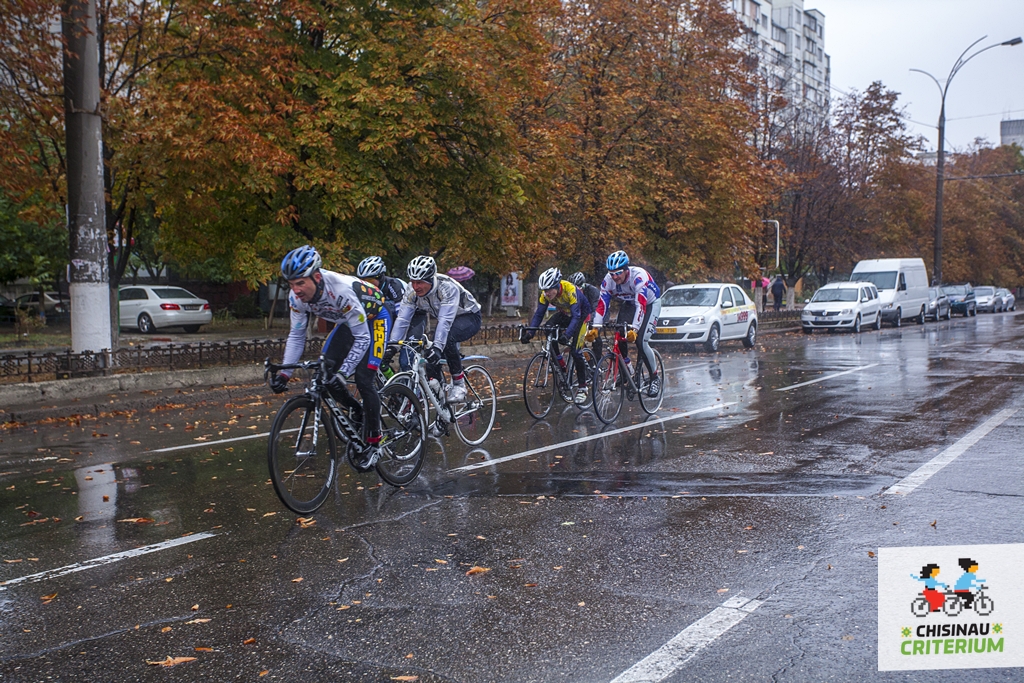 At the finishing line Fidesco supermarket network offered fresh fruits, Andy’s Pizza provided snacks and Om supplied the participants with water. The entertainment part of the event was ensured by the energetic and positive cheerleaders from Fitness Doza, cheering and supporting all bicyclists, even after the race finish. Here is the most anticipated part – the winners and the award ceremony! All participants are awarded by an electronic chip, thanks to which the true champions have been identified by the active chronometer system Race Result!

The first racers, in the following age categories, take their places on the podium: 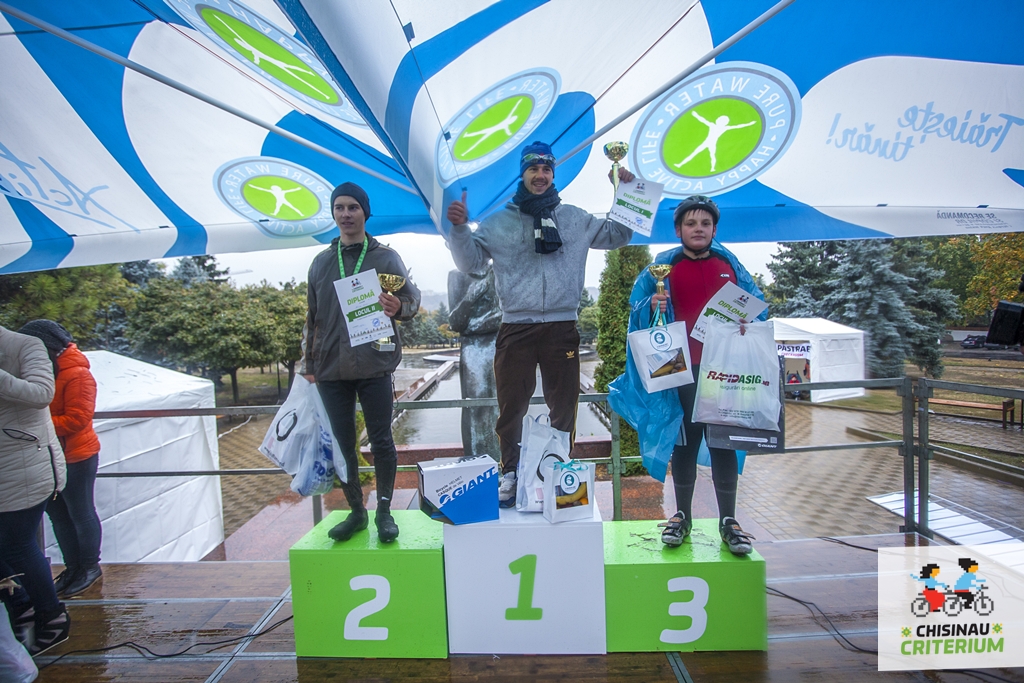 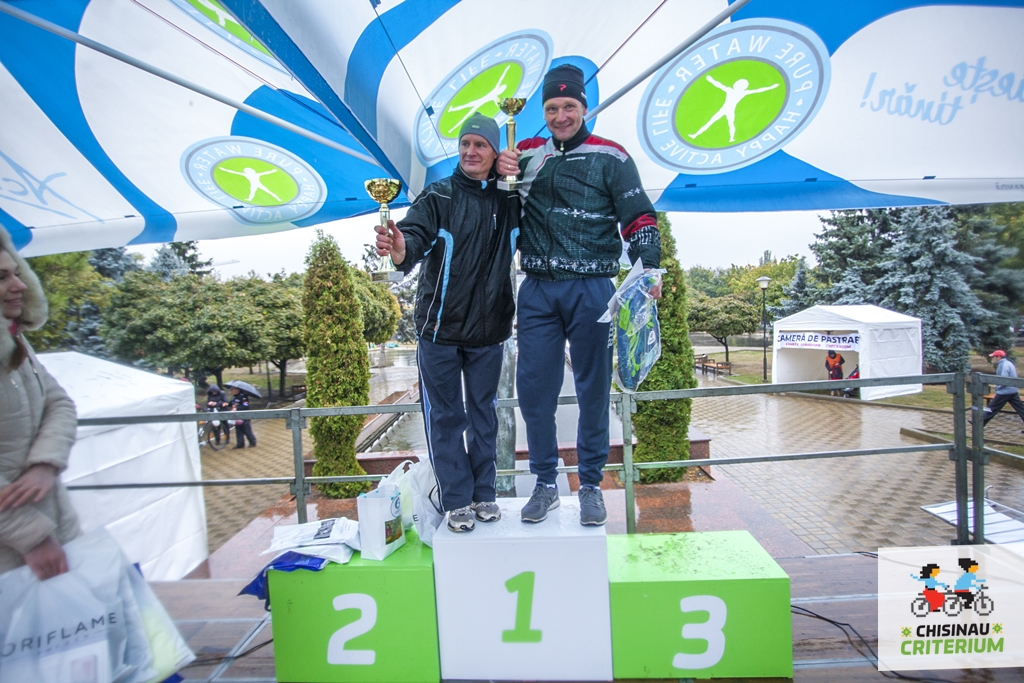 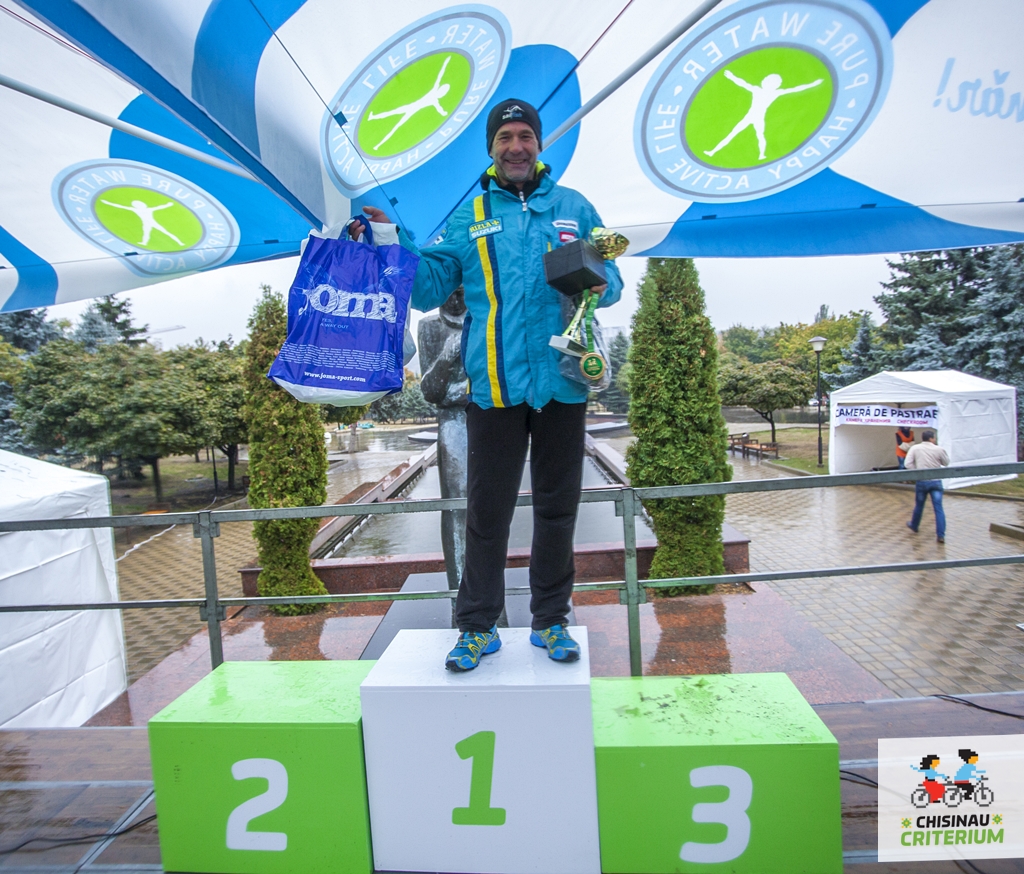 For their heroism champions receive many prizes from Hippocrates, Oriflame, Rapidasig, X-Style, E-Sanatate, Giant, Casov, JOMA and Bikeshop, as well as cups, medals and diplomas from the organizers of the race. 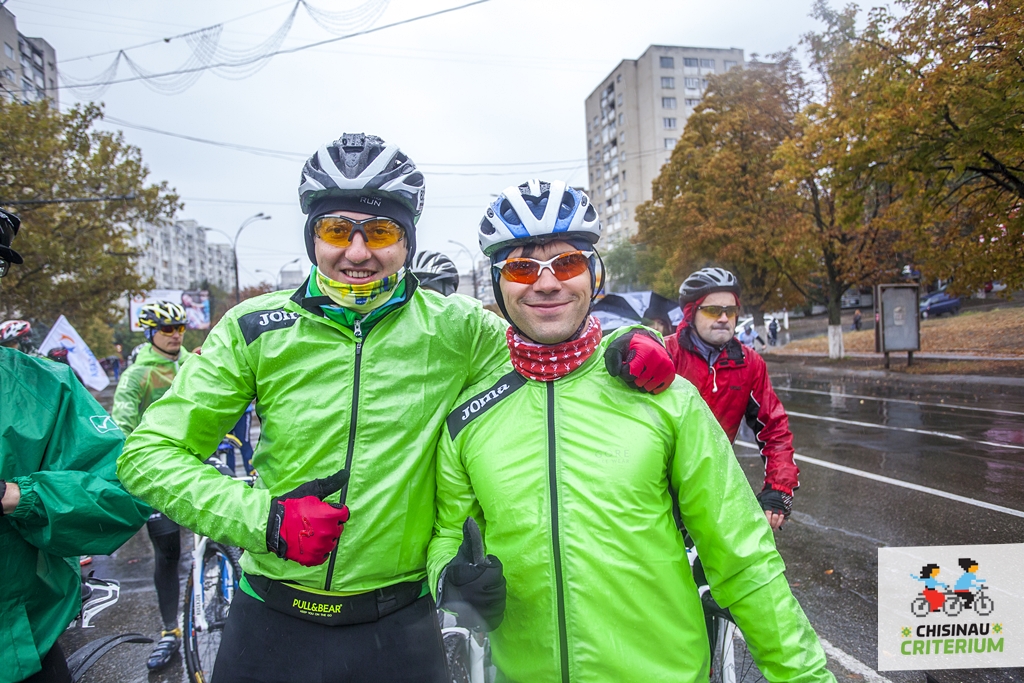 Also, prizes are given to the only two women who dared to overcome the 50 km on wet asphalt, and raced to the end. Congratulations to Anna Cazacu and Nadezhda Bilsagaev. 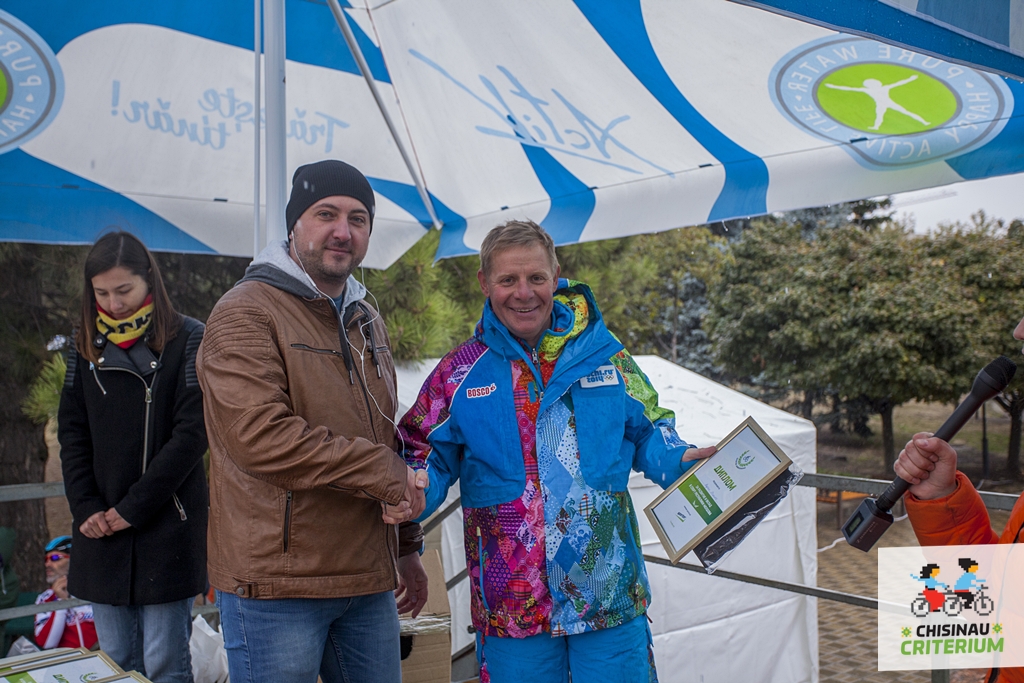 Special thanks go to the Ministry of Youth and Sport of the Republic of Moldova, Cycling Federation of Moldova for support in organizing this cycling event. Also, thanks to Chisinau City Hall, who helped in organizing and holding the event in the amazing Riscani sector, the Afghanistan War Victims Park. 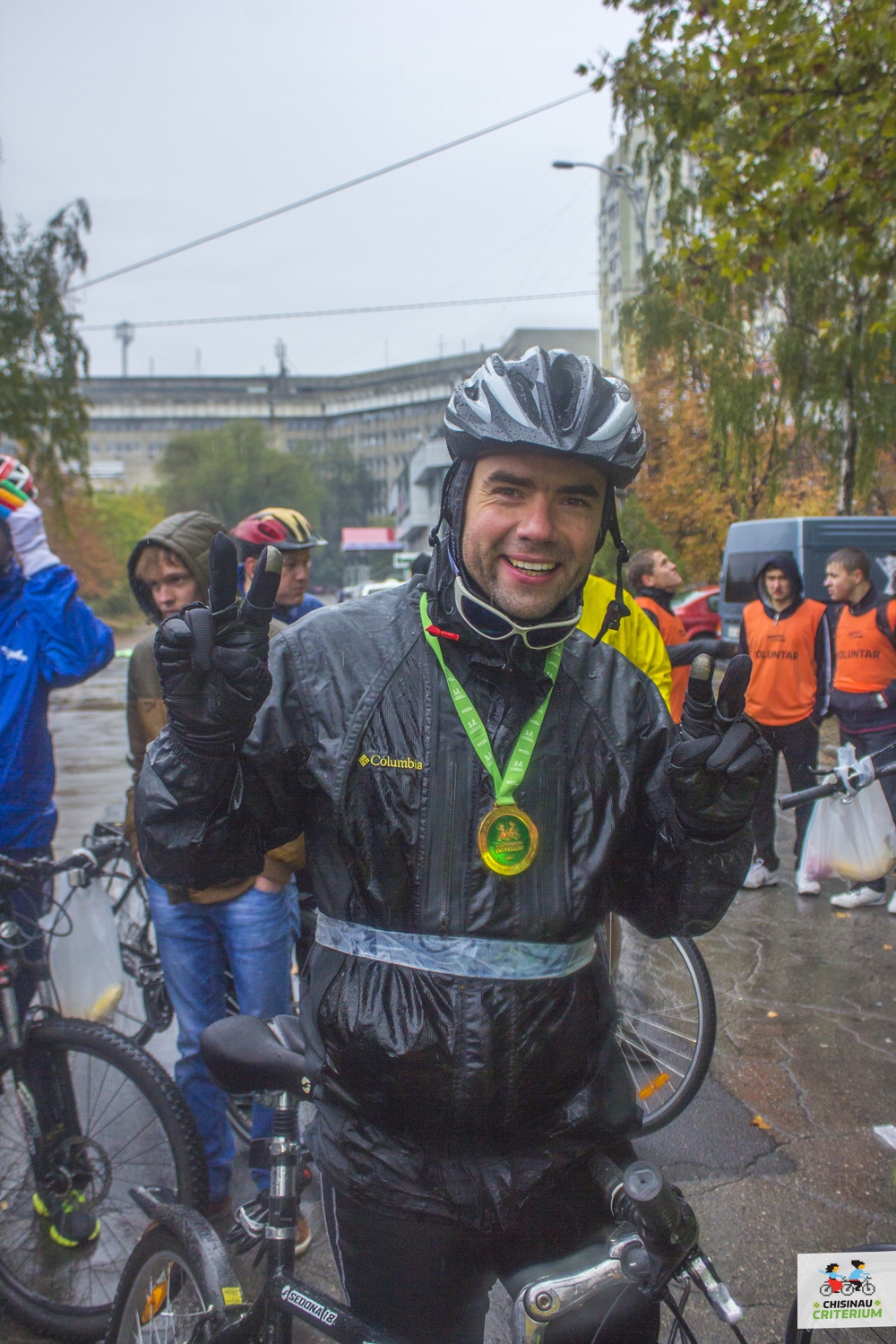 Also, we received great support and help from marshals, patrols and the emergency employees; without them no sport event in the city can take place. They monitor everything to be in order and take care of our health. 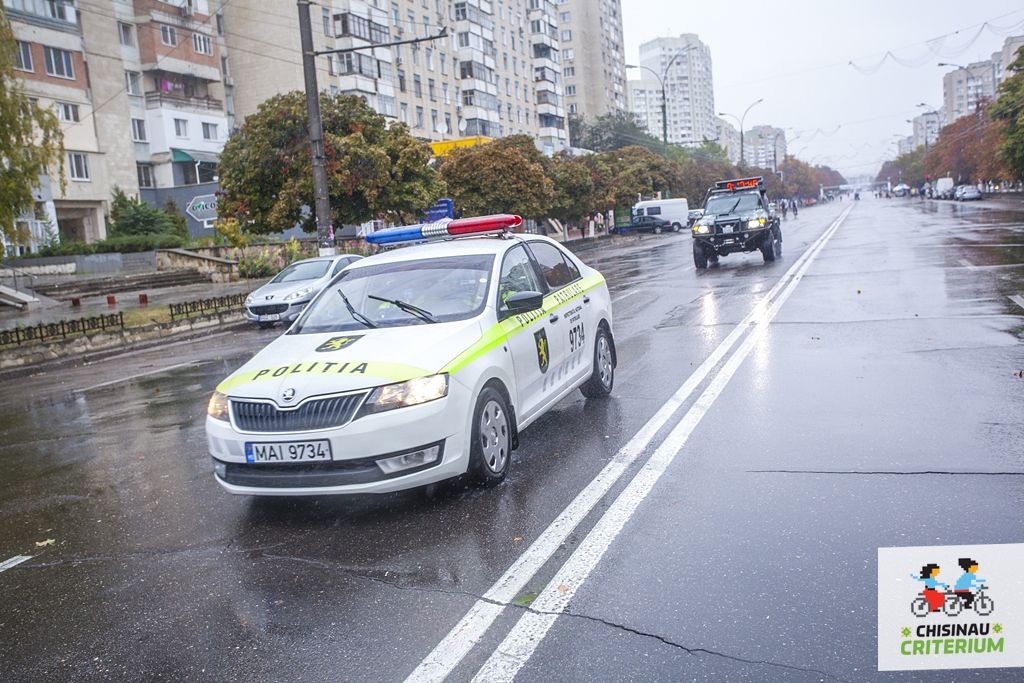 And last, but not the least, we would like to thank our Chisinau Criterium volunteers, who had been by our side from start to finish — THANK YOU, we are now ONE BIG HAPPY FAMILY! 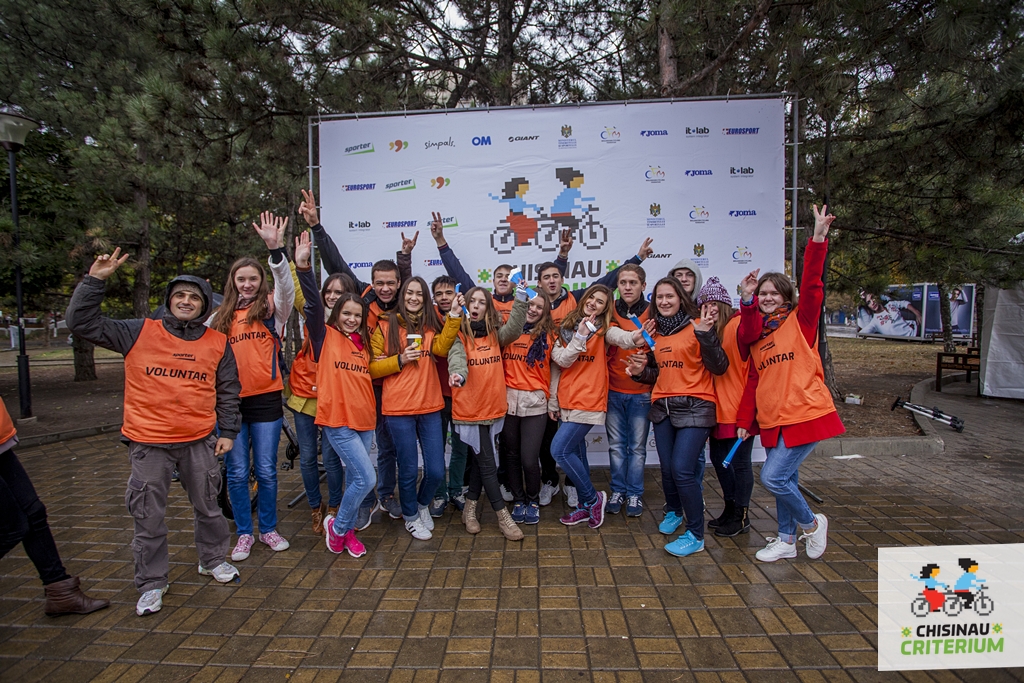 Thanks to those who got off their bed and visited the bicycle event. It is very important for us to bring satisfaction to you through such events. Thank you, dear Chisinau Criterium 2015 participants for support and happy moments you created! 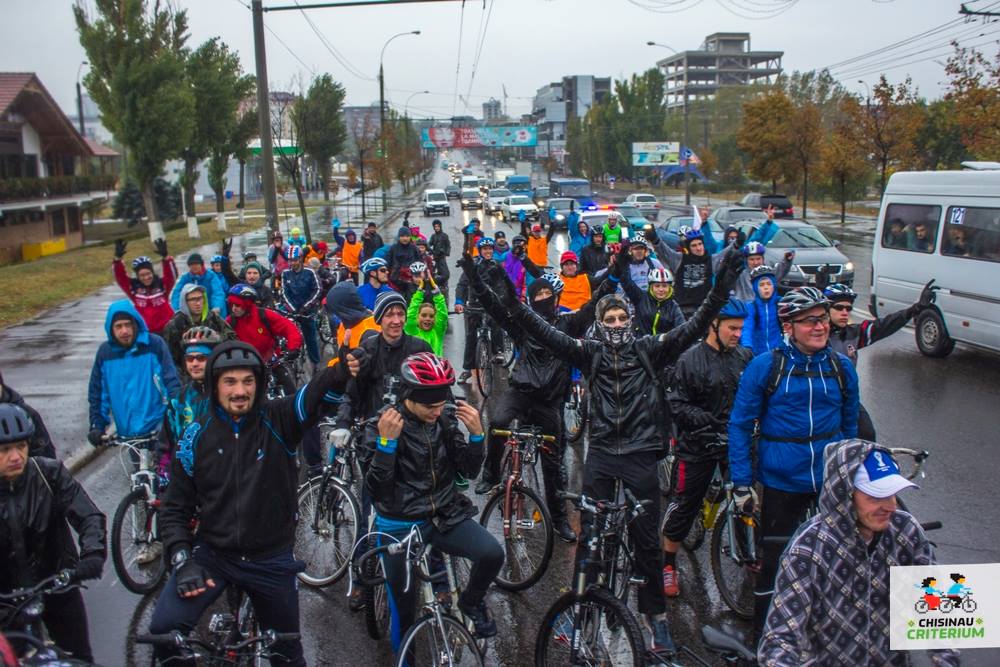 In this bad weather your smiles and happiness warms us to the bones and brings us tons of satisfaction!

Your happiness is our success!