Animatic is the son of the animator… 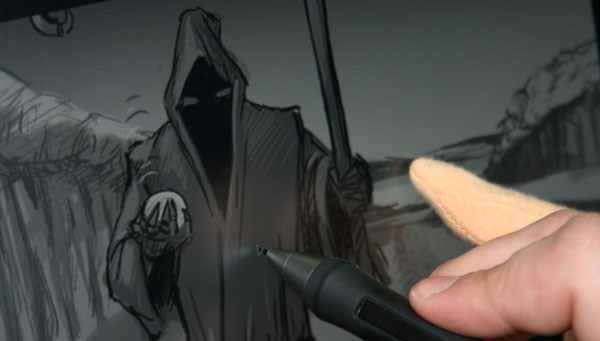 The conversation in our office more and more doesn’t sound like human talking. Words like “Animatic” “Plan”, “Close shot”, “Distant shot”, “Medium shot” and the rest. At one moment, we decided to specify the concepts and judging the obtained results, we have that…

Animatic is:
a) cultured milk drink
b) the son of the animator
c) an incorrect mathematician
d) the owner of the Animal Planet channel

Plan is:
a) g-g-g-g
b) ha-ha-ha
c) the sequence of activities directed to aim achievement
d) I don’t know, I don’t smoke

Medium shot: all staff thinks that this is for sure not about the deviations and rippling, that is why the medians can’t be draw there.
Detail- it will serve as a thing that remains after assembling and dissembling the radio set by any staff of the company.
Frame- is one of the Simpals staff. The company is about staff and there is always a lack of them.

By the results of survey, the situation is recognized hopelessly bad and unsatisfactory. That is why we decided to reprove to everybody and carry out a literacy campaign. So:
(The begging of the instruction)

Animatic- is the draft of the future film advertisement, in our case is the cartoon, is the next stage after scene selection. In fact this is the animated scene selection. The composition and the shot duration are approved at the production stage of Animatic. In principle, the Animatic is the final part of the most creative work in cartoon.

The Animatic, as well as the cartoon includes some components: scenes, plans, frames…

An arena corresponds to each scene, for example gypsy dragging kibitka in the field is one scene and gypsy in the forest is another scene. Scenes are divided into plans and plans into frames…
Plan is a fragment of video (or film) from gluing to gluing (and not at all a g-g-g-g!!!), as well the duration of the film from the start up to the stop of the camera.
For example, gypsy swinging his head or the turkey jumps from kibitka.
The plan can be different in size. A man is taken as a measure of size.

Close shot -is called the image which fit a human head of objects that are similar size to a human head.
Long shot – is called a plan, in which can fit a human body in full- blast.
Distance shot- is a plan in which the human body will be small, less than the fifth part of the frame.
Medium shot- is an intermediate between close shot and long shot, in this plan the human will fit only waist-high.
Detail- plan in which can fit an eye, mouth (a part of face) or commensurable with this parts objects.
We also use milk plan (breast-high) and paschal (know why).
In plan a simple action I am happening. It is made from frames.

Roughly speaking a frame –is a static image. There are 24 per second of them in the cartoon. During the work at the animatic, the final frame composition and the arrangement are confirmed, that do not change there after.
(the end of the instruction)

Now, after we have arranged everything in our heads, we started working with new forces: we pronounce all these new words firmly, drink coffee, call Serdar the 25-th frame. Because his beard doesn’t fit into the 24-th frame.