We have already mentioned that the world community spoke very favorably of our animated film “Dji. Death fails”. It makes us really happy! Now we’d like to present you another list of festivals which have selected our film for screening.

For the moment, our animated film has been selected for three more festivals.

SHORTini. Quite a young film festival, that accepts short films of every kind and format.  It’s held since 2003, so it’s only 10 years old. According to the information on the website: “Welcome to the space for people who love cinema in every form”.

The festival will take place in Augusta (Italy) from 2 to 4 August.

The next festival is Scratch! The festival is dedicated to short and medium length animation movies. It will take place very soon,  from 14 to 15 June, in the city of Lecce (Italy).

Here’s the recipe for a good festival: ½ kg of good movies, 2 or 3 professional animators, 1 thematic workshop, 250 grams of funding and 3 movie fans. Then stir it and leave to infuse until June. Now you can serve it! 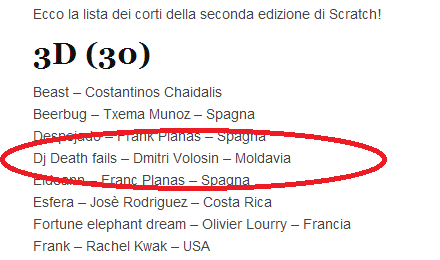 Except for one thing. Now they’re sure that they’re going to show an animated film not about death, but about a Dj. They promised to correct the title. OK.

The last festival for today is Mercado 3D Wire.

It’s a Spanish festival focused on videogames, animations and computer design. The organizers select 100 best short films of animation that will appear in the catalog with the contact details of each project and be viewable during the market for festival programmers, tv channels and buyers.

The festival will take place in Segovia (Spain) from 5 to10 November.