Dji. Death fails  This is our fourth work in a row. We’ve been doing it for about 6 months. That’s a decent amount of time. During this period we have collected enough material which we would like to share.

So, how did it all begin?

Of course, with an idea. Actually, it’s pretty difficult to describe the process of creating an idea, so let’s assume it appeared by itself. And inspired by this idea, we got down to work. 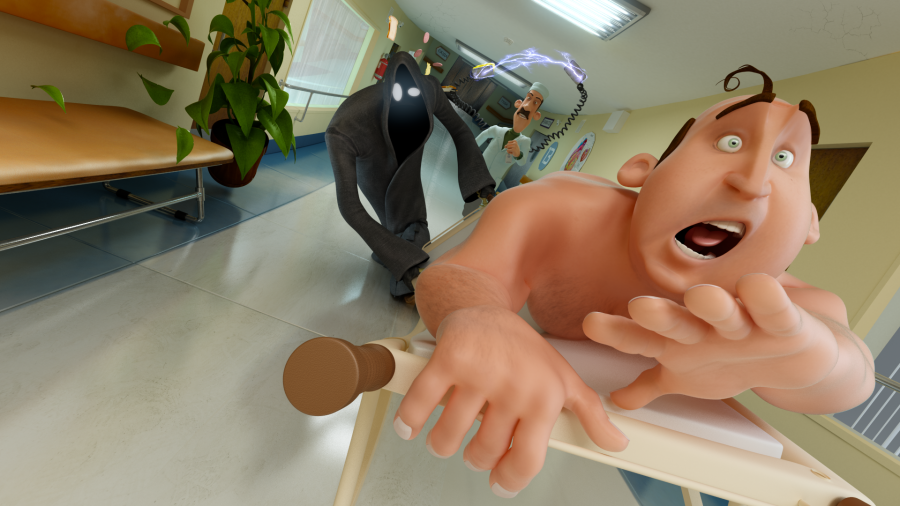 At this stage we structure the subsequent work, write the script, develop the characters, draw the storyboard and make an animatic. In exactly in that order.
Script
The script is a bunch of crumpled paper scattered all around, clouds of cigarette smoke and red overstrained eyes. It’s a broken computer. Then another one. This was the approximate atmosphere in which the script for this episode was being created. You can read it here.

Now let’s move to the characters. According to our idea, in this animated film we had three of them:

We’ve already mentioned in our blog, how we created Dji, that’s why we’d like to pay attention to the other two characters.

It was necessary to draw in detail not only the character figures, but their faces as well. That’s why we had to draw not 2 or 3 sketches, but much more (our director is quite fastidious). A lot of material remained “behind the scenes”. Eventually, when the most appropriate character is selected, his sketches are drawn in color. Why should we do it if he’s not modelled yet? We need a 2D colored character to understand what character we’ll have in the end. In pencil drawings it’s not quite clear as there is no volume.

The main criteria for selecting a character is not so much his technical quality, but his emotionality. In other words, it’s not always important HOW the character is drawn, but whether he conveys the director’s vision and concept.

Bob is a hard working truck driver. He got so exhausted that he even fell asleep at the wheel. As a result, he met Dji. His complexity lies in the fact that he appears in several states:
– Alive in the car
– Lying half dead in the intensive care unit
– And finally, as a ghost.

By the way, we made Bob in the car at the end of production, just a couple of days before the project’s deadline as we decided to strengthen the beginning of the cartoon.

These are variants that could become our truck driver. 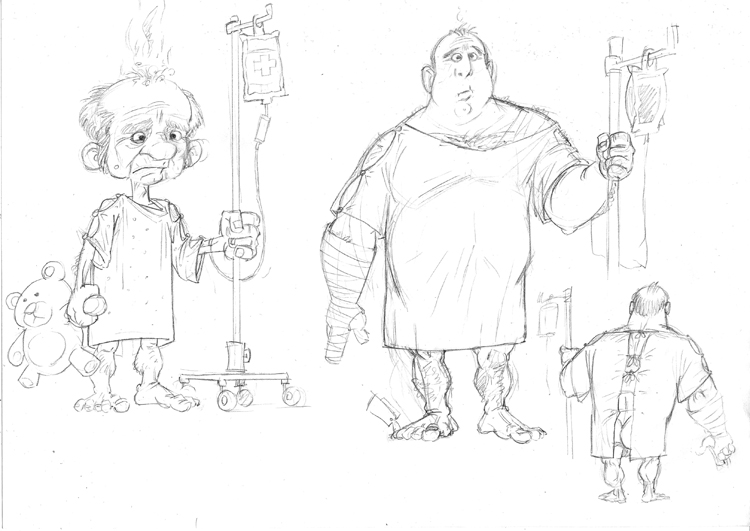 Generally speaking, we had to invent everything, draw it and bring to life.

Here’s the result of our work.

If everything was quite clear with the usual state of Bob, then we had a big problem with his ghost. At that moment we didn’t understand how he/it should look. 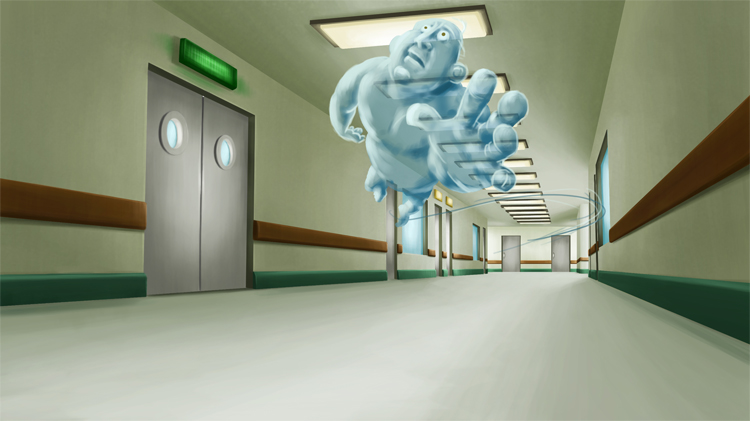 Then we started thinking what to do and decided to make it simply using what we had. After a number of experiments we’ve come to an acceptable result.

Nothing super special, the ghost was created in 2 programs. His body and fluids in Maya. Refractions behind the character and color – in Nuke.

The result turned out to be quite interesting.

That’s it! We’re done with the characters. After that we need a storyboard which is the next stage of pre-production. 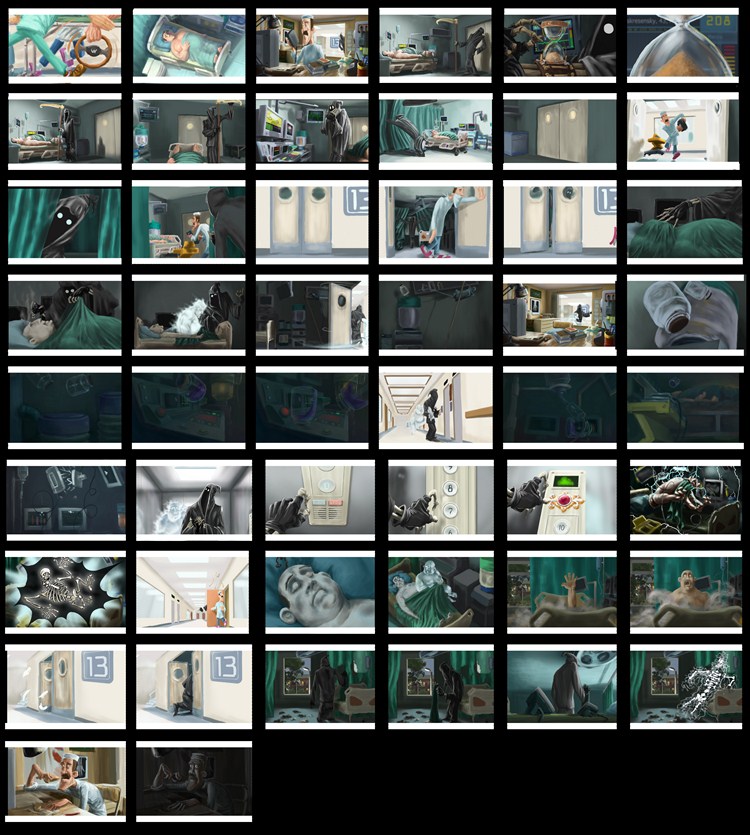 Initially, the storyboard is drawn black and white, after that it’s added color. At this stage we can understand in what color scheme the whole cartoon will be made, what atmosphere will be created in the frame and approximately what kind of lighting there should be.
In a perfect world, making such a storyboard once, you’ll not have to break your head over the visual at later stages. But it’s not our way. In any case, we change something, rearrange and improve. In the end, the result may be not the one we initially expected.
Initial ideas may well remain “initial ideas”, but something new or modified may appear in the cartoon. This is what we had in our cartoon. That color storyboard you see here doesn’t completely coincide with the final result.

Computer graphics is a combination of creativity and technology.

Before you begin animating a character, it’s necessary to do the setup: set all controls and ensure that the character can do everything our respected director needs. We don’t use any ready-made solutions and create all rigs by ourselves. 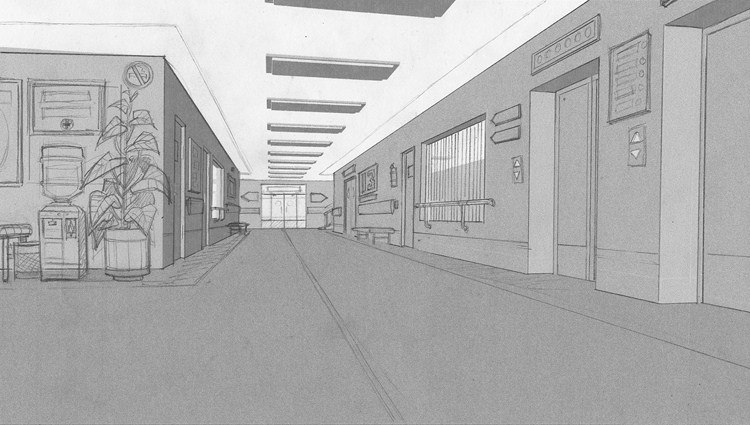 After preparing the character for animation, it’s time to think where the whole action will take place, in other words we need to create the environment.

In our previous cartoons we tried to save time and to draw all the backgrounds. The artist painted a picture and 3d characters, different effects and other things were laid on it. As a result, we had an interesting symbiosis between 2D and 3D graphics. It’s all great, but this technology implies a few restrictions: besides the fact that a 3d character has a difficulty in interacting with 2d-objects, we don’t have the possibility to move significantly the camera, that’s why we had to forget about flights and turns of the camera. 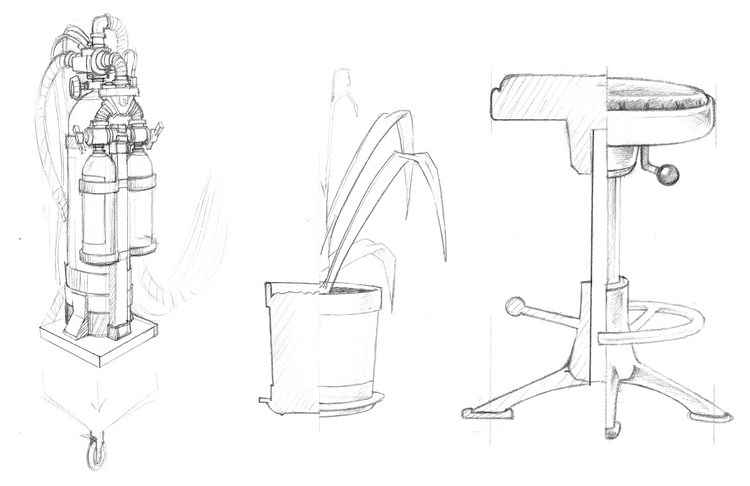 In this cartoon we decided not to limit ourselves and to make everything in 3D. It doesn’t mean that we don’t have to draw 2d pictures for backgrounds. These pictures are used as references for lighting, positions and color of objects. Basing on these references, we can begin texturing our backgrounds. When the characters, setups and environment are ready, we can start animating.

4 and a half animators worked on this cartoon. Good animation is obtained when the animator gets into the role of his character. In other words, we can assume that the animator is an actor of stage and screen.

The joke is in the fact that each animator sees his character’s movements in his own way. And it turns out that one and same character moves in different ways. In order to avoid it, we shoot video references. What is it? We take a camera and several volunteers who have to act like our characters: think like them, move like them and so on. What is this thing for? To build a common understanding of the characters’ movements. By the way, we have an animation supervisor who sees that everything is done properly.

Animation is approximately in the middle of our production. After this stage we have to visualize everything.

As I do visualization, I can say that it’s most interesting period of production.

At this stage everything gets colored. This is how it’s done in the world:
1. An artist colors a picture.
2. A visualizer reproduces the scheme of lighting and atmosphere as in the picture.

This is how we do it:

1. An artist colors a picture.

2. A visualizer reproduces the scheme of lighting and atmosphere as in the picture….and nothing works out. Well, he obtains a certain result, but in animation everything doesn’t look so cool as in the single frame. Either there appears a mistake with the additional sources of light or the artist didn’t work out a correct lighting scheme, so in the next frames when the camera turns, the whole picture changes unpredictably.

But in fact, it’s not a problem as in the end both the artist and the visualizer sit down together and make a product that makes everyone happy.

Visualization is one of the most resource intensive stages of production. When we started to count shots we understood that we couldn’t do without a render farm. Thus, with the help of Kaspersky Lab we acquired a render farm. A small one, for 10 computers, but it helped us a great deal. Without it we would probably be still rendering the cartoon.)))

In addition to computers, it’s very important what software you use for rendering. We’ve been thinking for a while what to use and decided to render everything with V-Ray. It miraculously fit into our pipeline and helped to save a lot of time.

Visualization is not the last stage of production. It goes hand in hand with compositing. At the stage of compositing everything is collected in one pile. Considering the fact that rendering is done at the very end of production, the following thing happens. The first 70% of time required for the project people work more or less relaxed. They see that there is plenty of time ahead so they can continue their creative search and make several versions of the same animation. It leads to the fact that we have less time for the final rendering stage than we planned and we don’t have the possibility to make any mistakes.

Composers and especially visualizers work in very tough conditions. Very often we don’t have time to make any changes in lighting or atmosphere of the picture. And then we have to modify the existing material. This is what we do at the stage of compositing- we modify the material received during rendering (Doc’s sweater turned out to be dark green, but according to the director’s idea it had to be of a different shade. So instead of rendering once again all shots with Doc from 3d package we simply changed the color in all shots).

In fact, editing of the cartoon is not a separate process. It stretches over the whole production period. In the end we need just to polish some rough edges.

That’s it! Congratulations! You’ve read it to the end:)

And now a little bonus. The things that we didn’t mention in the post. During the development of characters we spent a lot of time on designing and drawing of the following objects:

1. Dji’s watch – we made it very detailed as our character will have this gadget in the subsequent series as well. 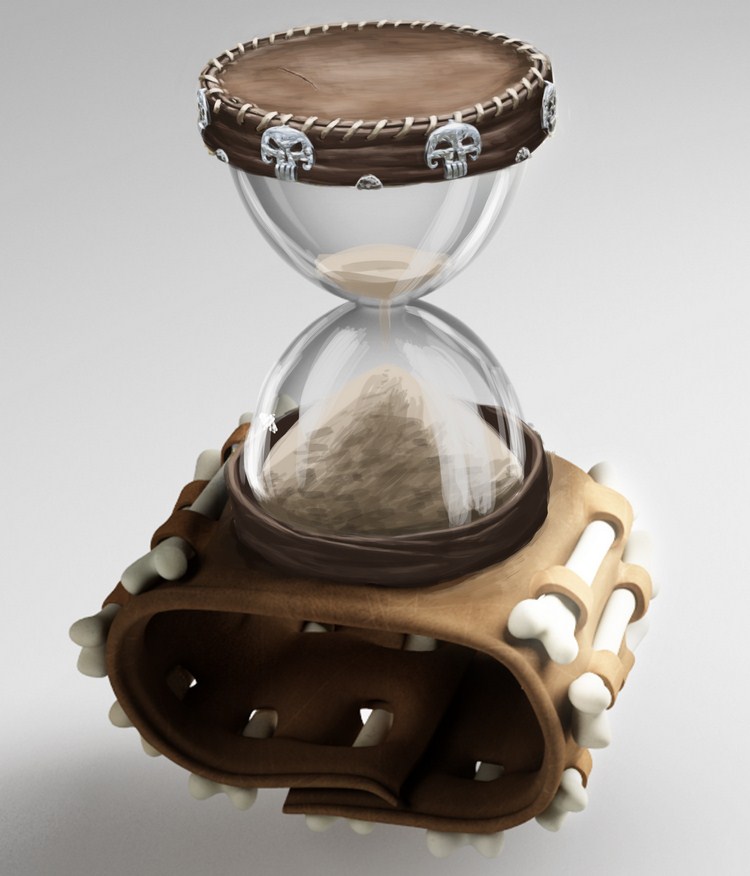 2. Scythe- if you noticed, the scythe’s blade is connected to the shaft not with a heel, but with a bony hand which simulates the hand of Dji.

We paid attention to details in the shot with Doc sitting in his office. He has some very rare books. They were released in a limited print run, just in one copy. That’s why he takes care of them and will never sell them. One of his books is called “Forgotten Sandwich Recipes”.

Besides that, in this episode we gave a hint at the second cartoon. One of the main characters of the second series appears in the first episode. But we won’t tell you where he is.
Now you can see the whole cartoon.

P.S.: We’d like to thank Kaspersky Lab for help in acquiring RenderFarm for our cartoon.
Our previous cartoons you can see on our Youtube channel